It is hard to believe it is already the middle of February. Wow, time is flying by. We have gotten past the extreme cold spell, so glad about that. This winter we have had more wind than ever, certainly more than we are used to. It seems every time Alan went out in the groomer, a blizzard would hit and be blowing the trail in behind him. It has been frustrating to say the least. I am not talking about mild little breezes, I am talking about 30 + mph winds. We have plenty of snow which usually softens the landscape rounding out the landscape, but the wind has created harsh edges on the winter landscape.
Now the temperatures are moderate, in the 20's. Last night was the first night that we have had really nice Aurora here, lately it has been too cloudy for us to see them. Even as I strolled around the lodge this morning the lights were still glowing faintly in the star filled sky. Standing outside in the early morning, breathing in the crisp clean air, watching the aurora and sipping a nice cup of coffee...life is good.
Alpine Glow on the Alaska Range 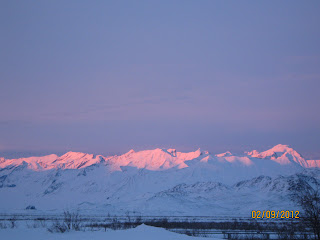 Sunset over the Maclaren Valley﻿ 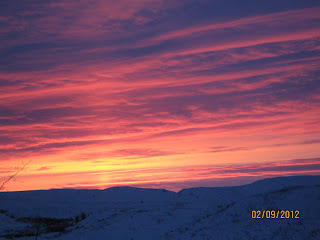